When we celebrate the significance of the development of BASIC at Dartmouth, it is important to remember the linkage from the past to the present.

The IEEE, an international professional association dedicated to fostering technological innovation, research, and education, has dedicated an IEEE Milestone marker at the Collis Center to commemorate the creation of the BASIC programming language in the building's basement in 1964.

IEEE (pronounced I-triple-E) launched a worldwide milestone program 50 years ago to mark places of significance in the history of human innovation. Among the spots where IEEE plaques have been dedicated are the hilltop outside of Bologna, Italy, where Guglielmo Marconi built his first wireless telegraphy tower in 1895; Thomas Edison's lab in Menlo Park, N.J., which opened in 1876; and the Nara, Japan, building where the Sharp Electronics Corporation developed the 14-inch thin-film-transistor liquid-crystal display for TV in 1988.

The plaque, placed outside the south entrance of Collis, reads:

"Beginner's All-purpose Symbolic Instruction Code (BASIC) was created in this building. During the mid-1970s and 1980s, BASIC was the principal programming language used on early microcomputers. Its simplicity and wide acceptance made it useful in fields beyond science and mathematics and enabled more people to harness the power of computation." 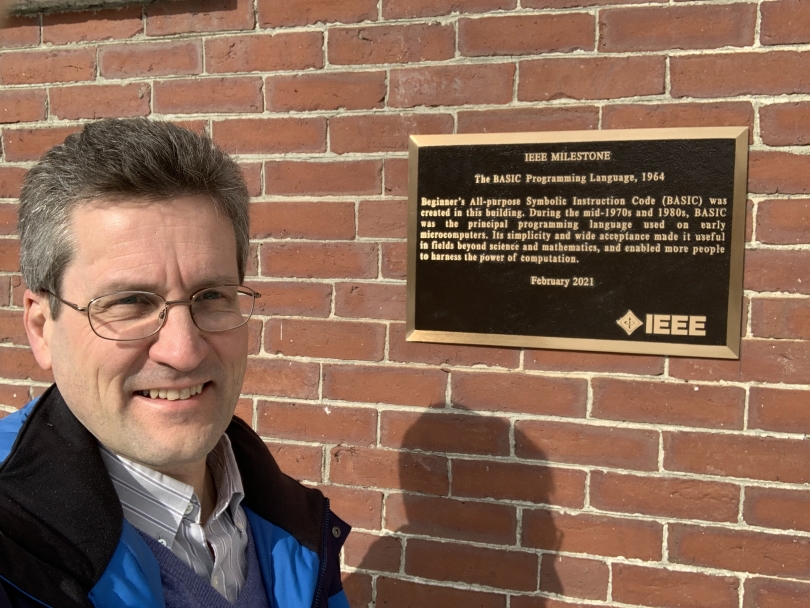 David Kotz '86, the Pat and John Rosenwald Professor of Computer Science, stands next to the IEEE Milestone plaque outside the south entrance to the Collis Center after it was installed earlier this month. (Photo by David Kotz)

Normally, an IEEE Milestone marker dedication would be part of a public event, but the pandemic put such plans on hold, says Jim Isaak, president emeritus of IEEE. On a recent Zoom call, Isaak joined David Kotz '86, the Pat and John Rosenwald Professor of Computer Science. Kotz was interim provost when the BASIC commemoration project started.

"We would have loved to have a special event," says Isaak. "But the folks at Dartmouth worked hard to make sure we could have the plaque up in time for a dedication on Feb. 22—which is Tom Kurtz's birthday."

Kurtz (then a professor of mathematics), John Kemeny (a mathematics professor and later Dartmouth president), and a group of undergraduate students developed BASIC and the Dartmouth time-sharing system in 1964. Kurtz went on to head the College's Kiewit Computation Center. He still lives in the Upper Valley.

"BASIC was literally the birth of personal computing," says Isaak. "It's amazing how much has been done with it since then. It still hides within various machine control systems, where BASIC was extended to provide control mechanisms."

Kotz says the motivating principle behind Kurtz and Kemeny's development of the simplified programming language was to advance teaching and learning.

"It really was the mechanism that introduced an entire generation of people to computing and influenced many of them to go into computing or into some related discipline," he says. "It drove the growth of the computing industry and the computing field in a way that probably wouldn't have happened otherwise."

And BASIC's influence was worldwide, Kotz says. "It wasn't just Americans and it wasn't just educated Americans who were discovering computing through this, it was really a much broader reach. Today we talk a lot about inclusivity and broadening access to computing, but BASIC was there doing that 50 years ago."

The goal of the IEEE Milestone project is to highlight the places, people, and organizations that have made profound contributions to technological innovation, and especially some that "may not be as well known as say, an MIT, or a Silicon Valley," Isaak says.

"We hope the plaque can help people see that Dartmouth is as innovative and active in computing and computer science today as it was in the 1960s," he says.

Dartmouth's undergraduate and graduate programs in computer science are at the forefront in cybersecurity and privacy; algorithms and theory of computation; computational health and mobile computing; graphics, vision, and robotics; and in many other areas, Kotz says. Centers such as the Institute for Security, Technology, and Society, the DALI Lab, the Augmented Health Lab, the Neukom Institute for Computational Science, and the Reality and Robotics Lab offer just a small sample of the important work going on at Dartmouth, he says.

"When we celebrate the significance of the development of BASIC at Dartmouth, it is important to remember the linkage from the past to the present."

In 2014, Dartmouth hosted a series of commemorative events titled BASIC At 50. The celebration recognized the enduring impact of BASIC, showcased continuing innovation in computing at Dartmouth, and imagined what the next 50 years might hold. The celebration also featured the debut of the film Birth of BASIC, produced by Dan Rockmore, director of the Neukom Institute for Computational Science. The documentary features Kurtz and some of the Dartmouth undergraduates who developed BASIC recounting that time.

William Platt can be reached at william.c.platt@dartmouth.edu