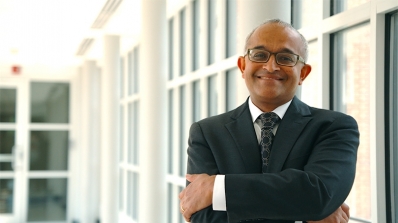 Quote of the Day from V.S. Subrahmanian

New Europe is running an interview with our very own V.S. Subrahmanian:

In today’s world, the capture of a terrorist leader or the destruction of a terror cell is one of the basic functions of any intelligence agency in the world today. Computer scientist V.S. Subrahmanian is applying a big data approach to fighting terror by trying to put more objective analysis into decisions about which terrorists to target.

His work stands squarely at the intersection of big data analytics for increased security, policy, and business needs.

Using sophisticated software, Subrahmanian – a Dartmouth College Distinguished Professor in Cybersecurity, Technology, and Society – calls the programme STONE, short for the Shaping Terrorist Organization Network Efficacy. It is a schematic of a terrorist network that identifying individuals, subgroups and affiliations. The software assigns a number to measure the lethality of the terror organisation, the higher the number, the more dangerous the group is.

Subrahmanian’s scalable methods to apply probability models in a wide variety of real-world scenarios and has created a field of computational cultural dynamics to analyase the behaviours of terrorist groups in order to make forecasts about the activities of groups like Hezbollah, Lashkar-e-Taiba, and the Indian Mujahedeen.

These methods have since been applied to a variety of problems including predicting the stability of nations and when protests will turn violent, as well as being able to gauge when a systemic banking or health crisis may occur.

The STONE technology uses open source data to identify the successors of captured terrorist leaders as well as predicting how their groups will change.

New Europe sat down with Subrahmanian on the side lines of the Digital Meet Festival at the 13th-century University of Padova to discuss how technology can be used to crack down on terrorist groups.

Read the entire interview over at New Europe.